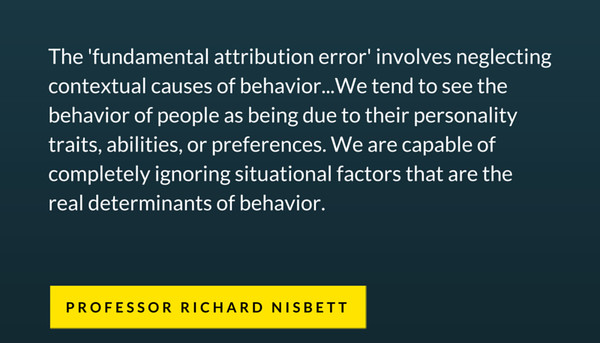 Fundamental Attribution Error is a well-researched area of psychology. It relates to the tendency that we all have in attributing other people’s actions to the kinds of person they are, rather than to them adapting to the situation they are in. So, the fellow driver who does not wave their thanks when you let them out of a junction is a horrible person rather than someone desperate to get a family member to Accident and Emergency, and the person you see lying in the street is probably drunk rather than someone who is having a heart attack.

Theories of personality are perhaps a natural consequence of this cognitive bias. They can be very negative as they bolster a world view where the planet is simply populated by good or bad people and although psychologists have found that as individuals, we rarely attribute our own behaviour to anything other than our personal situations there is also plenty of evidence that people experiencing mental health problems often self-stigmatise themselves as weak or as bad people meaning that they see no prospect for change and interfering with them seeking help.

Human behaviour is in fact more complicated than us all conforming to our personality type or our zodiac sign and we all need to be aware of our tendency to oversimplify our interpretation of others’ behaviour to be able to look beyond and try to understand it in their context. A wonderful quotation which illustrates this comes from Jon Gnarr, a stand-up comedian and actor who served as Mayor of Reykjavik for four years and spent his youth as a revolving door patient in the Icelandic Mental Health system.

“And sometimes maybe abnormal behaviour is just a natural reaction to abnormal circumstances”.

“An individual having unusual difficulties in coping with his environment struggles and kicks up dust, as it were. I have used the figure of a fish caught on a hook: his gyrations must look peculiar to other fish that don’t understand the circumstances; but his splashes are not his affliction, they are his effort to get rid of his affliction and, as every fisherman knows, these efforts may succeed”.

From my early twenties to my late thirties, I worked in professional theatre as a Technical Stage Manager. During that time, I met a large number of prominent British actors and celebrities. People I socialized with were always excited to hear my opinion of what kind of person X or Y was. It took me years to realize that all I was seeing was a snapshot of that person, often in stressful situations, that I knew nothing about that person and that I most certainly should not judge them.

Once we understand that other people’s lives are just as complex as our own and that they also have to deal with their own individual stresses and situations then perhaps it is easier to feel empathy with them. That will make it a lot easier to strike up a conversation with them with something as simple as asking “are you OK?”

And guess what else? Not jumping to conclusions about the reasons for other people’s behaviour will be a lot less stressful for you too.